Auto shares rallied on Wednesday after a Parliamentary panel report recommended a stimulus package focused on the sector to boost demand, particularly the recommendation to slash goods and services tax (GST) rate by 10 percent.

The sectoral gauge, Nifty Auto index gained over a percent with all but one constituent trading in the green. The index has rallied almost 20 percent since the start of October. The rally has been fueled largely by rising demand on the back of the festive season and a preference towards personal mobility amid the COVID-19 pandemic. 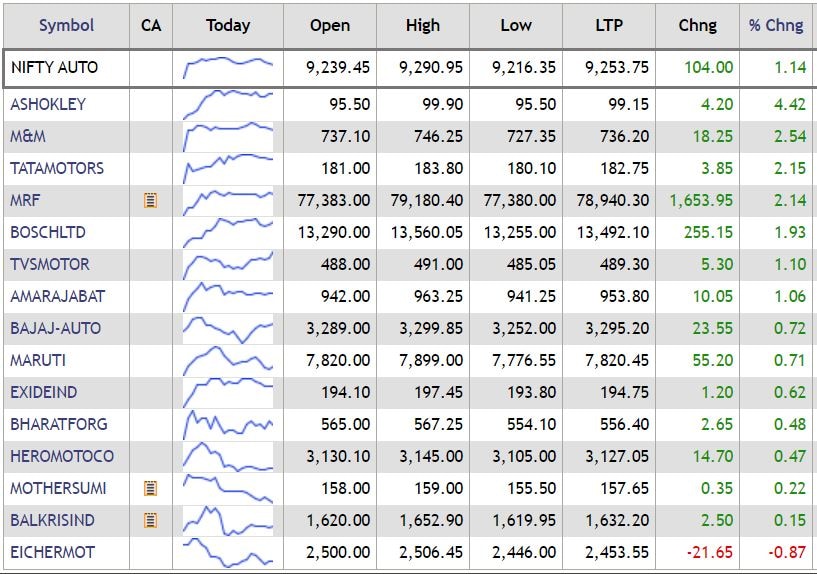 A Parliamentary panel report noted that the slowdown in the auto sector has led to a loss of 3.4 lakh jobs and the sector could see two consecutive years of contraction.

It further suggested reducing GST on used cars to 4 percent from the current 12-18 percent to generate demand.

According to the latest Society of Indian Automobile Manufacturers’ (SIAM) data, passenger vehicle sales rose 12.73 percent YoY in November at 285,367 units as against 253,139 units sold in the same month last year.

Analysts also await the outcome on the scrappage policy as well as contours on the recently announced PLI scheme for the automobile sector (Rs 57,000 crore for automobile, auto components sector and around Rs 18,000 crore for advance cell battery over a five-year period).

Post the sharp run-up in sectoral heavyweights on the back of faster than anticipated demand recovery, especially in rural India, ICICI Direct has downgraded some players while it incrementally retained a positive stance on players centered around urban demand pick-up and CV space that is on the cusp of a cyclical recovery.

The brokerage house retains a buy rating on Bajaj Auto, Tata Motors, M&M and Ashok Leyland in the OEM pack. On the ancillary front, it retains a buy call on Minda Industries owing to its ability to outperform due to rising kit value and premiumisation. The brokerage maintains a hold rating on Eicher Motors, Bharat Forge, Motherson Sumi and Exide Industries.