Controversy surrounds the 300 MW Liquefied Natural Gas (LNG) power plant to be built by Lakdhanavi Ltd. once again with the last-minute amendments made to the project agreement years after closing the bids.

The amendments have been made with the consent of the Ceylon Electricity Board (CEB) and the agreement has once again been submitted to the Cabinet for its approval, which was supposed to be taken up last week, but has been now referred to this week, The Sunday Morning learnt. 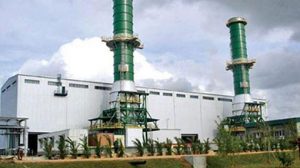 It is also learnt that the amendments have been made to the agreement due to the issues faced by Lakdhanavi Ltd. with regard to the financing of the project, as the initially agreed loan provider had withdrawn from the project because it got delayed for more than two years.

“Initially, they were supposed to get a loan from KfW (a German state-owned development bank), but they have indicated their unwillingness to provide the loan as the project got delayed. And as a result, Lakdhanavi Ltd. has proposed some of the changes,” a senior official of the Ministry of Power, who wished to remain anonymous, told The Sunday Morning.

“The AG’s Department has made several comments and with the comments, the agreement has been submitted to the Cabinet. It is expected that the new agreement would be taken up at this week’s cabinet meeting,” the senior official noted.

Quoting a senior government official, who wished to remain anonymous, who commented on the Lakdhanavi Ltd. bid to construct a 300 MW LNG power plant in Kerawalapitiya, The Sunday Morning reported in March last year that the award should be given to the lowest responsive bidder (GCL China Windforce and RenewGen) and Lakdhanavi’s bid was not responsive; their bid was rejected on two occasions by the Technical Evaluation Committee (TEC), but later it was converted into a non-responsive bid from a responsive bid.

Highlighting the importance of adhering to the condition of Request for Proposals (RFP), he said that the bidders were not allowed to change the conditions of the RFP, but in the Kerawalapitiya power plant tender, Lakdhanavi had seriously violated the RFP conditions.

“The crucial issue is the violation of RFP conditions. You cannot change the conditions on the basis of what other bidders bid. In this tender, the RFP clearly said that the taxes should be included and also it mentioned that the engineer’s estimate must be a reasonable price; Lakdhanavi have said that they can claim the bid for $ 175 million and at the same time, the RFP mentioned the project is $ 300 million. They would have used the extra cash to fill the gaps and at the end what they use is CEB’s money, as it is a subsidiary of the CEB,” he explained.

The Sunday Morning learnt that in the case of a Public-Private Partnership (PPP) power project, where a third-party investor was investing in building the power plant, the credibility of the bidder’s financing bid must be subjected to evaluation.

In evaluating Lakdhanavi’s financial proposal, The Sunday Morning learnt that there are two major risks that stand out from the perspective of the Government which resulted in the rejection of their bid offer twice by the TEC and by two members of the Standing Cabinet Appointed Procurement Committee (SCAPC) and the PAB. That is, the unrealistically low capital cost proposed by Lakdhanavi and the unrealistically low incremental heat rate.

According to the cabinet memorandum dated 22 June 2018 on the observations of the Ministry of Finance and the Ministry of Mass Media on the Kerawalapitiya tender, then Minister Mangala Samaraweera stated that the bid offered by Lakdhanavi – $ 175 million – was not realistic compared to the engineer’s estimate of $ 300 million, whereas bid prices of all the other bidders were around the engineer’s estimate.

The Minister further stated that Lakdhanavi has also assumed that the company is qualified for value-added tax (VAT), nation building tax (NBT), and port and airport development levy (PAL) exemptions for the import of machinery and plants during the construction period, whereas, as per the RFP and bid clarifications issued prior to the bid submission date, bid proposals were not to assume or rely on any privileges, concessions, or guarantees from the Government and such assumptions could be regarded as a material deviation according to the respective clauses in the RFP documents. Therefore, such material deviations should result in the rejection of the bid and further, the Department of Fiscal Policy of the Treasury also confirmed the non-availability of tax concessions through its letter dated 5 January 2018.

Nevertheless, in February this year, the Government awarded the contract to construct the second phase of the 300 MW LNG power plant in Kerawalapitiya to Lakdhanavi Ltd., overturning a cabinet decision of the previous Government made just over a year ago.

The approval, as learnt by The Sunday Morning, is conditional upon Lakdhanavi’s withdrawal of a petition filed at the Supreme Court against the original awarding of the contract to a Chinese company, GCL China Windforce and RenewGen. Lakdhanavi filed a petition at the Supreme Court soon after the decision was reached in February last year as it was the lowest bidder while GCL China Windforce and RenewGen was the second lowest.

Originally, cabinet approval was granted to award the tender to set up two 300 MW LNG power plants in Kerawalapitiya with the PAB approving the awarding of the second contract to Lakdhanavi Ltd. to set up a new 300 MW LNG power plant. At the time, then Power and Energy Minister Ravi Karunanayake said that the decision to award the setting up of a 300 MW power plant to the first and second bidder in a single tender for an independent power producer was bipartisan.

However, as it was reported last week, the project documents negotiated between the CEB and Lakdhanavi Ltd. included the implementation agreement, the power purchase agreement (PPA), the fuel supply agreement, and land lease agreement. It is stated that certain changes were introduced by Lakdhanavi based on the concerns of its lenders.

According to the local media report, the AG’s Department held that the RFP for this tender did not provide for amendments to be proposed and made to project agreements after bids were closed. “In the circumstances, the applicable legal principles do not permit amendments to be made subsequent to the draft agreements based on which the bidders were evaluated and selected,” the AG’s Department had stated, according to the report. “Upon careful scrutiny of the amendments proposed, it is noted that almost all the amendments have significant cost implications and provide for the imposition of additional liability and risks on the GOSL (Government of Sri Lanka) and the CEB, which amount to material deviation from the bid submitted.”

However, at present, the CEB is awaiting cabinet approval to sign the electricity purchasing agreements with Lakdhanavi Ltd. to construct the long-awaited 300 MW of LNG power plant in Kerawalapitiya.

CEB Chairman Eng. Vijitha Herath told The Sunday Morning that approval from the Public Utilities Commission (PUC) would be received and as soon as cabinet approval is granted, the agreements would be signed and the construction would begin.

“We have already submitted the cabinet papers,” he added.

When construction begins, this will be the first power plant constructed in Sri Lanka in eight years, Eng. Herath noted.

Furthermore, when contacted by The Sunday Morning, Power Minister Dullas Alahapperuma said cabinet approval had been granted in February to a proposal made by then Minister Mahinda Amaraweera. 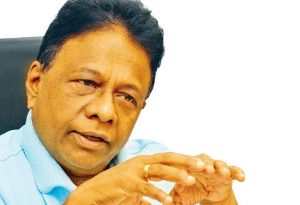 “The approval was a conditional approval as it was given on the condition that Lakdhanavi Ltd. would withdraw the court case. However, in the new cabinet proposal submitted, the Ministry requested the Cabinet to get the confirmation from the Attorney General’s Department as to whether the court case has been withdrawn by Lakdhanavi Ltd.”  Minister of Power Dullas Alahapperuma

“The approval was a conditional approval, as it was given on the condition that Lakdhanavi Ltd. would withdraw the court case. However, in the new cabinet proposal submitted, the Ministry requested the Cabinet to get the confirmation from the Attorney General’s Department as to whether the court case has been withdrawn by Lakdhanavi Ltd.,” he added.

However, he noted that once cabinet approval is given, the construction would be launched.

Minister Alahapperuma has recently stated that two LNG power plants will be constructed by the year 2023 as a solution to the power crisis in the country in the future.

He also said that although discussions have been going on since 2007, not a single LNG power plant has been built for 13 years. The proposed LNG power plants have also been mentioned in the CEB Long Term Energy Generation Plans (LTEGP) prepared annually since 2015.

No change to tariffs: LTL

When contacted by The Sunday Morning, LTL assured that there would be no financial impact due to any of the changes that had been made recently to the agreement, and stated that no changes would be made to the initially agreed tariffs either.

Furthermore, the company said that the changes that were discussed and made were legal alignments that lenders expected.